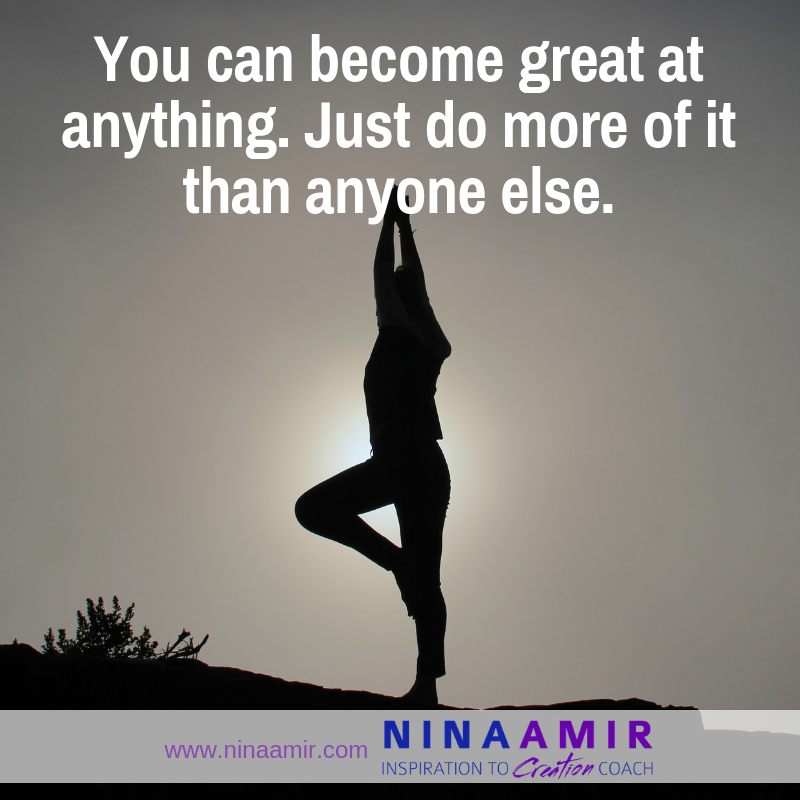 Do you know what it takes to become great at something? I bet you have that desire…to be great rather than good. (Admit it.)

Stop Ignoring the Desire to be Great

I bet you feel it…the desire to be great. However, it’s possible that when you feel that push, you ignore it. After all, it’s easier to remain comfortable and not work any harder.

We all know greatness doesn’t come from innate talent. It comes from committed and focused effort over time in a particular area, like playing tennis, computer programming, photography, writing, painting, or financial planning.

Maybe you don’t pay attention to the push for excellence because you’re afraid. If you try to excel, you might miss the mark and remain good rather than great. “Why bother,” you reason.

Here’s the thing: If you ignore the push to be great, you end up feeling dissatisfied. You know you could be and do more. You know greatness lies within you and wants to come out. And you haven’t allowed yourself to rise above average.

You have to work harder…harder than anyone else. And, yes, that can be difficult.

Think back over your lifetime. When did you excel at something?

Maybe you were an award-winning writer in high school or college. Or you were the best runner on your college track team. You might have been a great nurse, doctor, lawyer, parent, employee, or painter.

Remember what it took to excel in that area. Were you more focused, harder working, or more committed than anyone else? Did you feel a sense of urgency or necessity to rise to greatness?

The clearer you become on how you achieved greatness in the past, the easier it will be to replicate that success. If you could do it then, you can do it again. Just follow the clues.

There’s Always a New Opportunity to be Great

If you look back over your life and only see mediocrity rather than greatness, don’t beat yourself up. Decide that now is the time to pursue greatness.

Commit to doing whatever it takes to become great. Seek out teachers and coaches. Find role models. And then begin working toward excellence.

Imagine what it would be like to become great at something… What would your days or life look like if you always strove for excellence—and achieved it? Visualize greatness, and allow that vision to motivate you to action.

Do More Than Anyone Else

To be great at something, you’ll have to work hard. The greatest athletes, entrepreneurs, and artists do a heck of a lot more of whatever they excel in than others in their field. For instance, if you want to be a great speaker, you would need to get on a lot more stages than other speakers, and practice, practice, practice. You’d deliver speeches over, and over, and over again until you became a great speaker.

People known as great at whatever they do also seek out guidance and support to help them excel. Using the example above, you might find a voice coach, movement coach, or speaking coach. You also could seek out the most exceptional speakers you know—ones who are better than you—and ask them to teach you what they know. And then you would try to rise to their level—and beyond.

To become great at anything, you have to stop accepting mediocrity in yourself.

Stepping Into My Own Greatness

I’d like to be known as a great writer. Recently, I realized I’m currently a good writer. To become great, I need to write more.

Yes, I produce a blog post or two each week and write a lot of emails. I publish at least one book of some sort per year. Plus, I typically spend a little time working on a book project each week or month.

That’s not enough to become a great writer. I need to write more every day. I have to produce more written work than other writers.

Specifically, I need to write and publish more books. If I churned out books, each one would teach me how to improve my writing. Every completed and published manuscript would help me hone my craft—and my message.

I have a ton of books to write! A great writer would get to working writing them all.

You know greatness lies within you and wants to come out.

In his book Outliers, Malcolm Gladwell claims says it takes 10,000 hours of doing one thing over and over again to become great. He uses examples of people like Steve Jobs and Steve Wozniak who spent hours programming to get to the point where they could create Apple.

Consider the greatest musicians and singers, like Itzhak Perlman, Pavarotti, Ludwig van Beethoven, and Lady Gaga, or the greatest athletes in the world, like Michael Baryshnikov, Serena Williams, Michael Jordan, or Tiger Woods. These people practiced, practiced, practiced. They tried new things. They shared their work. By so doing—by reaching and exceeding 10,000 hours of work, they moved into the realm of greatness.

What Do You Need to Do to Become Great?

Now is the time to say, “I’m done being mediocre. I am going to be great!”

The World Needs Your Greatness

When you become great, you will feel better because you are fulfilling your potential. More than that, you’ll inspire others to greatness. People will thank you for being a role model of the greatness they, too, can achieve.

Tell me a comment below what you want to become great at and what you plan to do to excel in that area.

Do you feel like you are stuck in mediocrity? Do you feel average but know greatness lies inside you…waiting to be released? It’s time to get out of your own way and get from where you are to where you want to go. It’s time to step into greatness. Give me an hour of your time, and I’ll help you see how to step into your best self and create your best life. To apply for a one-hour FREE Certified High Performance Coaching strategy session, fill out this application.

Nina Amir, is known as the Inspiration to Creation Coach. As one of 800 elite Certified High Performance Coaches working around the world, she helps her clients Achieve More Inspired Results. She works with people who want to realize their dreams, achieve their potential, fulfill their purpose, and live full lives that feed their souls. Nina is also a bestselling author, certified Law of Attraction Coach, certified rebirther, and ordained minister.