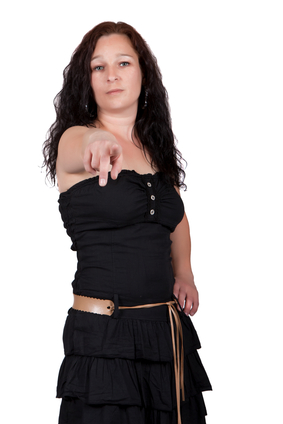 Denial—a mental place many of us spend time. Yet, doing so doesn’t serve us. It just perpetuates the story we tell to protect ourselves from the truth.

The other day a lady pulled into the parking lot and hit my car. I was sitting in my parked car. She damaged my bumper. She claimed the accident wasn’t her fault because my car was not well parked. I had pulled in on an angle rather than straight—and the spot she wanted to park in was, therefore, too narrow.

I admitted that I hadn’t parked straight. I had a hard time parking in the spot. She, however, refused to admit that it could be her fault that she had hit my car. She claimed she tried 11 or 12 times to fit into the spot, which wasn’t true, and then hit my car on her last attempt. If she had difficulty getting into the spot—all the parking spots are narrow in this particular lot—and hit my car in the process, the accident remained her fault. Even the police officer, who I had to call when she refused to give me her license or insurance information (because she felt she wasn’t at fault…), agreed; the person in the moving car, not the stationary car, caused the accident. She still blamed me.

This woman’s refusal to admit to her part in the accident made me think about how often we want to deny fault and blame others. It’s so much better to “fess up.” Often we go into denial even when we haven’t done something wrong, like hit someone else’s car.

For instance, maybe you didn’t do something, such as didn’t bother to fulfill a commitment or perform your best at work. Maybe you spent too much time on the Internet and not enough time focused on accomplishing your priorities. Or you watched television or read a book instead of getting regular exercise. Possibly you didn’t live up to your potential.

In such situations, it’s easy to fall into a state of denial and to say, “I didn’t have enough time,” “I’m too busy,” “I was tired,” or “There were other things I had to do.”

Denial is just another word for “excuse.” You could use this common excuse in many situations: “Something got in the way”… but that “something” is you.

I know this as well as anyone else. I can admit, rather than deny that I’ve been at fault of this kind of denial many, many times. And, honestly, this type of denial is worse than hitting someone’s car and saying it’s not your fault. When you make this kind of excuse, you lie to yourself.

It’s time to stop living in denial. Get out of that “river” of blame. Stop pointing fingers at others and at situations and, instead, turn the finger around and point it at yourself. Take responsibility for yourself. Make the necessary changes, so you have no reason to deny—to lie or make excuses—about your behavior in the future. Admit that you need to change and enter a different mental state—transformation. Let that river help you flow quickly to your full potential.

Nina Amir, is known as the Inspiration to Creation Coach. As one of 800 elite Certified High Performance Coaches working around the world, she helps her clients Achieve More Inspired Results. She works with people who want to realize their dreams, achieve their potential, fulfill their purpose, and live full lives that feed their souls. Nina is also a bestselling author, certified Law of Attraction Coach, certified rebirther, and ordained minister.