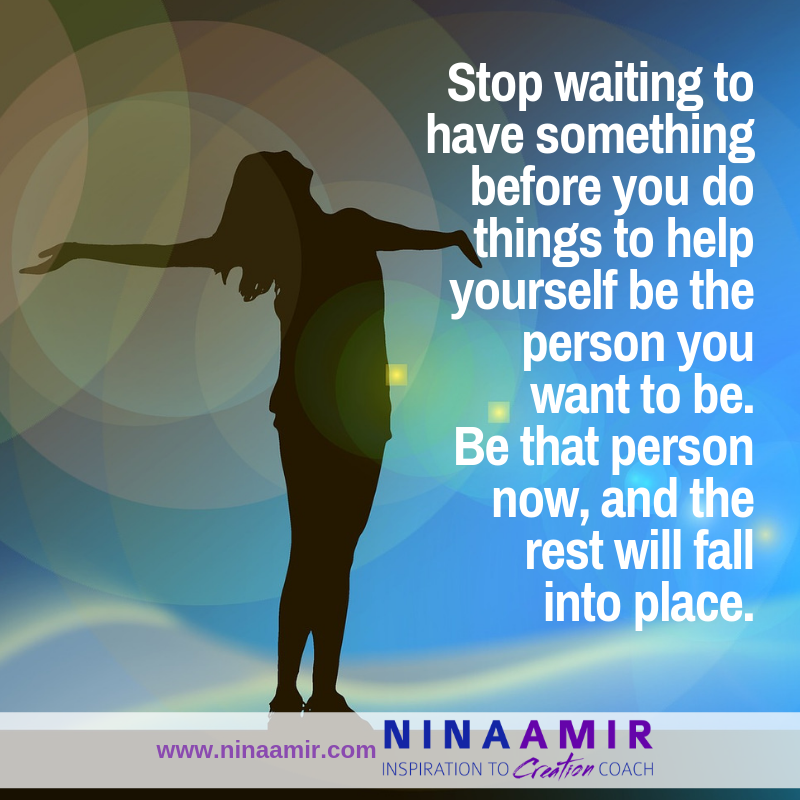 Have you been waiting to “have” something that you believe will allow you to “do” something so you can “be” something different? For example, maybe you want to have wealth so you can travel and be happy.

Guess what? You’ve got it backward. First, you need to be happy. Then you can have what you want, such as travel and wealth.

You have to be the type of person who can have what you want. But you are waiting to have it because you mistakenly believe that’s the first step.

Misconception about Creating What You Want

It’s a common misconception that, to become the person you want to “be,” you first must “have” certain things in place. “Having,” you might believe, allows you to “do” what you want. Only when you have and do will you be someone different. However, this assumption will not lead to you creating what you want.

You are busy waiting for the conditions to be right before you do anything that will help you be the type of person who can have what you want. With that strategy, you’ll continue waiting…and not having. And that vision you have of yourself as successful, happy, loved, prosperous, healthy, or whatever you want to be won’t become your reality.

To be the version of your self that you know or imagine you can become if things were different—you have to be that person now. Then, the corresponding actions—the doing—and creations—having—will follow. But know this: You do not need to have or do anything to be the person you want to be.

You have to be the type of person who can have what you want.

Why You’ve Got it Backwards

I was reminded of this truth recently while rereading Neale Donald Walsch’s Conversations with God series. In Book 3, God tells Walsch that we must first be what we want to be. Then, we do the things necessary to be that, which leads to having what we want.

Walsch has a conversation with the Creator in which God says the following:

Most people believe if they “have” a thing (more time, money, love—whatever), then they can finally “do” a thing (write a book, take up a hobby, go on vacation, buy a home, undertake a relationship), which will allow them to “be” a thing (happy, peaceful, content, or in love). In actuality, they are reversing the Be-Do-Have paradigm. In the universe as it really is (as opposed to how you think it is), “havingness” does not produce “beingness,” but the other way around.

First you “be” the thing called “happy” (or “knowing,” or “wise,” or “compassionate,” or whatever), then you start “doing” things from this place of beingness—and soon you discover that what you are doing winds up bringing you the things you’ve always wanted to “have.”

The way to set this creative process (and that’s what this is…the process of creation) into motion is to look at what it is you want to “have,” ask yourself what you think you would “be” if you “had” that, then go right straight to being.

In this manner, you reverse the way you’ve been using the Be-Do-Have paradigm—in actuality, set it right—and work with, rather than against, the creative power of the universe.

Here is a short way of stating this principle: In life, you do not have to do anything. It’s all a question of what you are being.

Let’s break this down step by step.

Don’t wait to have something before you step into being the type of person who could have it.

Many mystical and metaphysical teachings tell us that to create what we want, we must first align with that desire. The best way to do that is to become it.

Of course, it’s hard to be a toaster, if what you want is a toaster. But if you can be a person who owns a toaster. You can imagine what that person would be like and step into being that person now.

It’s more likely you want to be happy, wealthy, healthy, fulfilled, successful, or loved. But you might wonder, “How do I become something I am not?” Decide you are that—without needing to have or do anything at all. And be that.

In Conversations with God, Walsch asks God the same question: “But how can you “be” happy to begin with, or “be” anything you are seeking to be—more prosperous, for instance, or more loved—if you are not having what you think you need in order to “be” that?

Acting “as if” takes some imagination. And it requires a new belief about yourself.

Acting “as if” takes some imagination. And it requires a new belief about yourself.

You have to be able to visualize yourself already being the future version of yourself. That necessitates, first, the belief that it is possible to be that person. Second, you have to believe you are already that.

From that point, you must maintain the mindset of the person you want to be. For example, if you want to be a New York Times bestselling author, imagine what that person would be like. And then daily—minute to minute—step into that role—initially solely with the belief that you are already that.

Maybe you start writing consistently every day for three hours. And you attend the large book publishing events, like Book Expo America. And you submit articles to literary magazines. Plus, every day you get up, shower, and dress professionally—after all, someone might want to interview you, right?

In this way, you act as if you are a New York Times bestselling author.

You have to be able to visualize yourself already being the future version of yourself.

This may sound a lot like the advice to “fake it until you make it.” And it is…but you can’t really fake the being part of this equation. As God tells Walsch, “Your actions have to be sincere. Everything you do, do out of sincerity, or the benefit of the action is lost.”

If this concept seems hard to grasp, think of an athlete who, at some point, decides to be an Olympian. That decision leads him to act as if he already is an Olympian, and he behaves as such with full sincerity. In his mind and heart, that athlete believes he is already Olympian—that he has the potential to be that. And he starts expressing that belief in every way possible–internally and externally.

That leads to doing.

You can decide to show up now as the version of yourself you know and dream of becoming.

Let’s go back to the Olympic athlete as an example. Once he has decided to be an elite, world-class athlete—an Olympian—he starts to express that future potentiality. He not only considers himself an Olympic-level athlete, but he also develops the mindset and habits of a world-class athlete. He starts doing the things necessary to have what he wants—to qualify to compete at the Olympics and earn a gold medal.

Let’s say he is an ice skater. He gets up every day at 4 a.m. and is on the ice practicing at 5 a.m. He practices for three hours before he does anything else, like go to school. And when school is over, he heads to the gym for an hour workout and then goes back to the ice rink to practice for another three hours.

He does this six days per week—every week. No exceptions.

Plus, he watches what he eats, sleeps eight hours per night, drinks lots of water, and spends the little free time he has watching videos of former Olympic gold medal skaters.

He lives and breathes his dream of becoming an Olympic skater. And, eventually, he not only rises to that elite level but finds himself qualified to skate at the Olympics.

Which brings us to the having.

You do not need to have or do anything to be the person you want to be.

The skater in our previous example qualifies for the Olympics and gets to have the experience of skating in the event. He now also has the status of “Olympic Athlete,” and, he may even have a gold medal to bring home with him.

Be the person you want to be…right now. The doing and having will come to you naturally.

Have you decided to be a future version of yourself and, as a result, found yourself doing the things necessary to have what you wanted? Share your story in a comment below.

Ready to experience the impact of powerful questions? Give me an hour of your time, and I’ll help you see how to move toward fulfilling your potential and purpose so you make a positive and meaningful difference in this lifetime. Apply for a one-hour FREE Certified High Performance Coaching strategy session. Fill out this application.

Or register for my Certified High Performance Group Coaching program here. It’s a great option if you don’t feel ready for one-on-one coaching and want to enjoy the power of group learning.