Did  you know that the word for sin in Hebrew—chet—comes from the sport of archery? So does the word Torah, which refers to the Old Testament scrolls and the text they contain.

On Yom Kippur, the Day of Repentance, Jews all over the world recite the holiday liturgy, which contains a repetition of the words “al chet,” which are usually translated as “the sin.” What these Hebrew words really mean is “the missed mark.”

Hebrew has no real word for sin. There are one or two other words that refer to what we think of as sin but none that actually mean sin as we know it in English.

The word Torah means “to take aim.” Thus, the Old Testament teaches us to take aim. Sometimes, however, we take aim and miss the mark.

Even if you aren’t celebrating the High Holy Days this week, you might find the focus of these holidays and the meaning behind these words meaningful.

Why Use Archery Terms on the High Holy Days 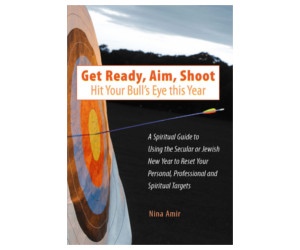 Why does Hebrew, the language of the Old Testament, use archery terminology for such important words? After all, sins are not something to be taken lightly and the Torah is the sacred text of Judaism. (It’s also the foundation of most Christian religions.) Maybe the reason lies in the analogy that can be made between an archer and a person repenting for wrongs committed.

Archery involves setting up targets in the middle of which are the bull’s eyes at which the archer aims his arrows. To hit the “mark,” an archer must practice her aim until she becomes good enough to hit not only the target but the bulls eye.

On Yom Kippur—and during the full ten days of the High Holy Days, which begin with Rosh Hashanah, the Jewish New Year—Jews look at the past 12 months of their lives to see what targets they set for themselves, how they practiced hitting those targets, and if their aim was true. They look at the targets to see if they managed to hit the bull’s eye. During this period of introspection they notice not only if they aimed their arrows and shot, but if they even got close to their mark. If not, the period between Rosh Hashanah, the Jewish New Year, and Yom Kippur provides a time to set up new targets, to reexamine or study old targets and to commit to practicing their aim. It’s also a time to set the intention—kavanah (another word that, while not related to archer, also means “to aim”)—to try harder to shoot true, to hit the bulls eye in the coming year.

What’s the bull’s eye? Judaism has 613 mitzvot (commandments), and while observant Jews try to hit them all, most Jews do not. All those commandments are meant to help us sharpen our aim. Torah teaches us how to aim in a righteous and in a spiritual manner.

If you aren’t Jewish, think of mitzvot as good deeds. Often the word is translated to mean doing something righteous or kind.

And each time you aim and shoot, each time you try to hit the target by performing a mitzvah (singular of mitzvot), you remember God. You aim towards God. If you hit the bull’s eye or even come close, you connect with God. That’s what Torah and mitzvot are all about.

No wonder the Jewish High Holy Days involve liturgy that uses archery terms. Al chet...the marks you and I missed last year. Torah…the target towards which you and I intend to aim this year.

Even if you aren’t Jewish, take some time to evaluate if you’ve missed the mark since the beginning of the year and set intentions for the remainder of the year. Leave me a comment below.

If you want to set new goals and reach them, I’d be happy to discuss how High Performance Coaching might help you fulfill your potential and live your life with more clarity, courage, energy, productivity, and influence—and the ability to hit your bull’s eye. To set up a 1-hour FREE High Performance Coaching session, click here. Then download the free session application, and submit it. I’ll contact you to schedule your session time.

2 thoughts on “What’s Archery Got to Do with the High Holy Days?”