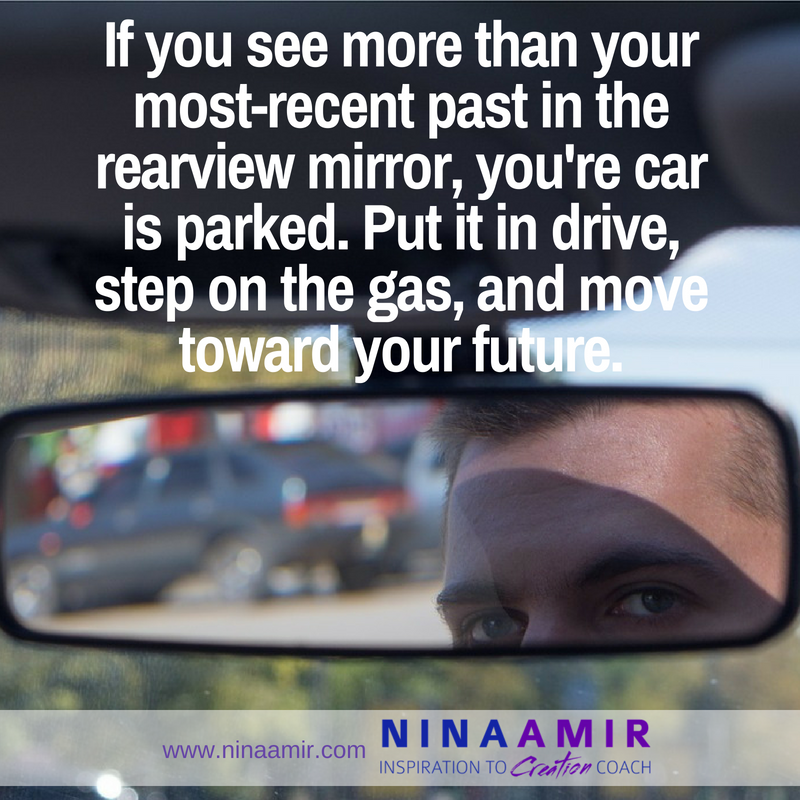 If you’ve ever driven or ridden in a car, you understand the purpose of a rearview mirror. It provides the driver with a way to see what is behind the vehicle. However, the past is sometimes referred to as an object “in your review mirror.” In other words, it’s something behind you that you can see in reflection.

I recently had the opportunity to go see a relatively new musical called, Bat Out of Hell, which got me thinking about the past and rearview mirrors. The musical is based on actor and singer Meat Loaf’s two bestselling albums, Bat Out of Hell and Back into Hell, which he created with songwriter Jim Steinman.

The performance included a song I’ve heard many times before called “Objects in the Rear View Mirror May Appear Closer Than They Are.” The lyrics say:

But it was long ago and it was far away,
oh God it seems so very far
And if life is just a highway, then the soul is just a car
And objects in the rear view mirror may appear closer than they are.

The more I thought about these lyrics, the more meaningful they became to me.

Don’t Focus on What’s Behind You

You’ve probably heard people advise, “Don’t look in the rearview mirror. Look ahead.” Of course, when driving, you must periodically check your rearview mirror. Knowing what’s behind your car increases your ability to drive safely.

When living your life, a quick check in the rearview mirror helps you know what you’ve left behind. However, you don’t want to remain focused on the past.

The past is in the rearview mirror. What you see out the windshield is the future. That’s where you’re heading—from the past and into the future.

Too much focus on the past keeps you stuck there mentally and emotionally. That means you will have a difficult time moving toward your future—what’s ahead.

Constantly checking your rearview mirror in life isn’t safe either. It can prevent you from seeing the turns you need to make or the stops you need to take. A backward view may mean you don’t see obstacles in the way or times when you need to avoid potholes or pass slow cars ahead.

The past is in the rearview mirror. What you see out the windshield is the future.

See the Future Ahead

Look in any rearview mirror, and you’ll discover that, indeed, what you see may appear closer. The more you look backward at the past, the closer it becomes. You bring it into the present moment and drag it along into the future.

If you don’t like what you see in that rearview mirror—if the past contains painful memories—stop looking backward. By continually remembering those events and pouring over them again and again, you bring them closer and closer.

Therefore, the key is to leave the memories of those events in the past. That’s where they belong. And you definitely don’t want to see them through the windshield. You want to see your desired future stretching out on the road ahead of you.

Leave the Past Behind

As you drive into your future, leave the past behind. You’ll know you’ve done so when you look into the rearview mirror and see something different.

Yes, you may see your most-recent past, but it should quickly fade, and something new should replace it as you continue moving forward.

Keep this in mind: The only way the past should get closer to you is if you put your car in reverse. If you left the objects in your rearview mirror behind long, long ago but they seem to be getting closer, you’ve shifted into reverse.

If what you see in the mirror never changes, you’ve parked in the past.

Shift into forward. Then put your foot on the gas.

The more you look backward at the past, the closer it becomes.

What’s in Your Rearview Mirror?

The best way to shift into high gear and move toward your future is to become more aware of whats in your past. That helps you let it go. Additionally, you want to know where you are going. You must have a roadmap for the future of your choice.

Take out a journal or piece of paper and list all the past events that keep showing up in your rearview mirror. What past events do you think about on a regular basis?

Now ask yourself this question: How are those events affecting your perception of the world, how you see yourself or others, your ability to take action, or what thoughts you think?

Then answer this question: Are those past experiences serving you now? More than likely, they served you for a while. Now they hold you back. Or, at the least, they make you unhappy or perpetuate your suffering.

When you arrive at that realization, it’s easier to shift out of park or reverse and into high gear. It’s easier to move on and leave the past behind. You’ll want to see the past moving farther away in your rearview mirror and your desired future moving closer as you look through your windshield.

If what you see in the mirror never changes, you’ve parked in the past.

When you decide to leave the past behind, you also choose to travel toward your future. To ensure you arrive at your desired future, create a roadmap.

Where do you want to end up? What would you like your future to include? And, as you travel, what stops would you like to make? Journal about this as well. Make a list of your final destination and how you will get there.

If you feel the need to go slowly, put your car in first gear, but move forward. Get your foot off the brake.

Leave the past behind. That’s where it belongs. Look forward, and drive toward your future.

What’s in your rearview mirror? Tell me in a comment below.

Do you feel like nothing can or will ever change—especially you—and that means you can’t become the person you know you can be…the person you want to be and feel certain you were meant to be? It’s time to get out of your own way and get from where you are to where you want to go. Give me an hour of your time, and I’ll help you see how to step into your best self. To apply for a one-hour FREE Certified High Performance Coaching strategy session, fill out this application.