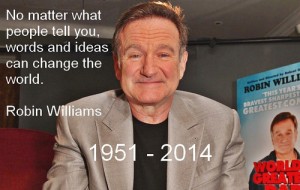 I’ve been struggling with how to write this post ever since I heard about Robin Williams’ death. Depression and suicide are such touchy subjects. It’s hard to write about them without offending someone in the process.

I’m no stranger to suicide. My daughter’s best friend took his life after their freshman year in high school, and a friend of my son’s took her life during their sophomore year. I also lost a friend to suicide after we graduated from high school.

While I’m no expert on depression or suicide, I was asked to write about teen suicide a few years ago. (You can read the Bay Area Parent article here.) I spoke to some experts at the time and learned a bit. My kids both spent some time with a counselor after the loss of their friends, and I was privy to some of the advice given. I received some as well.

Unfortunately, I guess I am more of an expert on what suicide does to those left behind. I saw the affect it had on my children and on the family of my daughter’s friend. I saw what it did to me, and even to other families and children who were in close contact with the teens who took their lives.

So what does that have to do with anything? Nothing from the perspective of most depressed people who choose to take their lives. They aren’t thinking about those they leave behind—at least not in terms of the pain they will cause or how much they will be missed—when they decide to end their lives. They just want to stop their own pain.

They aren’t thinking about reasons to live or finding any. They are focused on reasons to die.

I believe there are many reasons to continue living. And I suppose that’s why I’m writing this post. That’s what I’d really like to say to anyone who feels depressed and ready to take his or her own life.

Suicide is a permanent solution to a temporary problem.

Suicide is a choice that relieves your pain but leave those behind with the permanent pain of grief and loss. The people who love and care about you provide just one reason for you to continue living. My daughter, having suffered the loss of her best friends, has assured me she would never inflict that pain on anyone else. But I suppose it’s possible that you have to know that pain first to feel so sure you would not take your own life.

In the moment, you think your problem is so large that death is the only solution. But the problem…even depression…is not permanent. In a moment, a day, a week, a month, things could be better. Death, however, is permanent. Teens who commit suicide don’t quite get that. Adults, I think, do but miss the point—the problem is not permanent but the chosen solution is. If you choose that solution, you don’t have to live with it, others do.

You Can Choose Your Response.

I saw a man on the NYC subway who had both his legs amputated. Yet, he had a wife and three kids. And he was walking around with prosthetics. He could have been depressed, angry, disheartened. Instead, he created a fulfilling life for himself. He was helping his daughter with her bicycle (yes, on the subway), talking to his wife, and smiling at his children.

I am not trying to make little of depression and how it affects lives. I am not trying to compare one person’s problems to another. I am saying that every day we each make choices about how we deal with our circumstances and conditions. We can choose to respond to almost anything with a positive and hopeful attitude. We can choose to find a way to make it through another day as we look for a way to be happier, more peaceful, more fulfilled.

Every life is worth living.

There is always something we can do or focus upon to make our lives worth living. Even just remembering the value of life can change our perspective.

I was reminded of this when I taught writing in a mid-level security prison for men. A prisoner told me he remembered finding his high-school friend after he had committed suicide and an adult friend just after he took his life. But he also recalled his mother telling him that life was valuable—every life—and it should never be ended in that way. This tall, rather burly man related this with tears rolling down his cheeks. I don’t know what crime he committed that caused him to end up in that prison, but I know the lesson his mother taught him, which he remembered that day, hit home for both of us.

We all have value. Life has value. No matter what, there is reason to live.

May his memory be a blessing.

In the Jewish tradition, when we speak of someone who has died we say, “May his memory be a blessing (or for blessing).” I hope the blessing that comes from Wiliams’ death is a raised awareness about depression and suicide.

Robin Williams offered so many people the gift of his humor and his talent. Yes, underneath he was not always happy, a fact that is typical for many comedians. Yet, I can’t imagine he had nothing to live for…not one thing.

I hope from this time forward we won’t associate his name with depression, thinking only of his suicide each time we watch one of his movies or see a clip of one of his stand-up comedy routines. Instead, I hope his death causes more people to think about those they know who might need help and to reach out to them. I hope it causes more people to learn about depression and suicide—the symptoms and signs—so they can prevent their friends and family from suffering the same fate. And I hope it causes more people to get help before they seek that permanent solution to their temporary problem or problems, even if the problem is regularly struggling with depression. I pray more people reconsider ending their lives and choose to live them instead.

If you have suicidal thoughts, or have had them in the past, please find a reason to live. Or call the Suicide Prevention Hotline and have someone help you find one. Please do the same for anyone you know who suffers from thoughts of suicide.