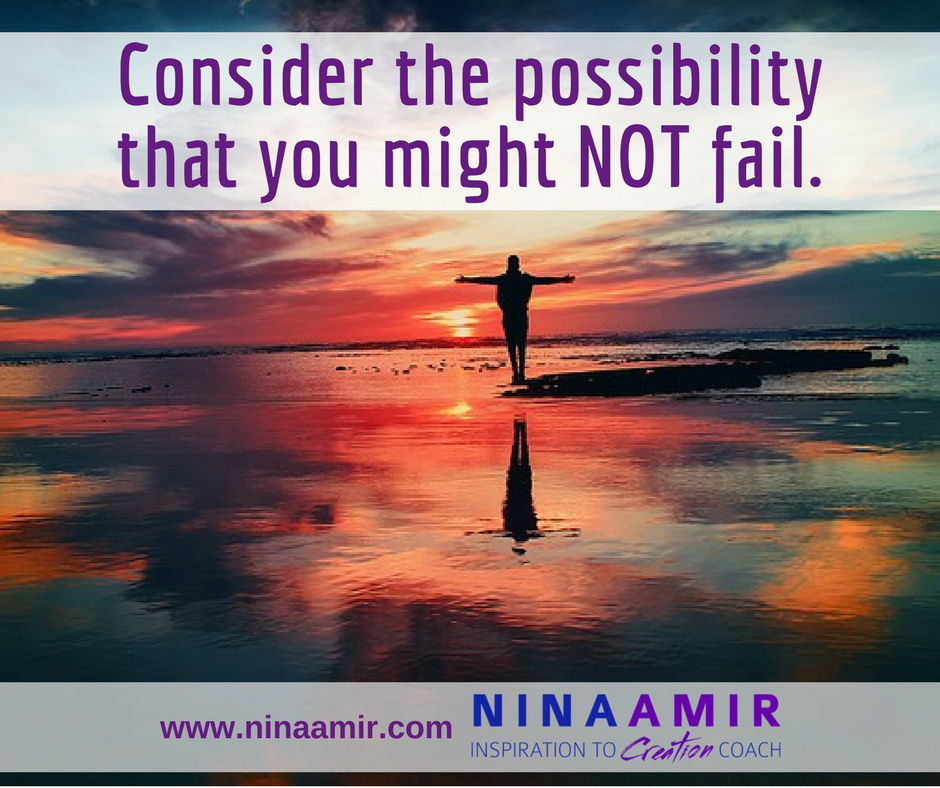 I might fail. How often have you had that thought? But how often do you think I might not fail? I bet not nearly as often…if at all.

The thought of failure likely stops you in your tracks. It causes you not to share your work, start projects, take action, share your message, and live fully. It doesn’t allow you to fulfill your potential or your purpose—to be your best self.

When you shift your thinking from I might fail to I might not fail, you allow the possibility of success to enter your mind. You start to entertain a different thought, one filled with potential. Hey! There’s a chance I might succeed. Because if I don’t fail, then that’s the results—success.

Sometimes you need that little shift in mindset to help you get through the real challenge—the fear of failure. You need possibility. You need a glimmer of hope.

When you focus on the possibility that what you do—whatever it is—might work, you begin to feel your aspiration level rise. That propels you forward with confidence.

The thought ‘I might not fail’ gives you permission to take action.

Reframe Your Idea About Failure

You’ve probably heard all the stories about people who failed, failed, failed until they finally succeeded. There’s Oprah, Thomas Edison, Stephen Spielberg, Walt Disney, J.K. Rowling, and Vincent Van Gogh, just to name a few. They provide inspiration on the path to success.

But they had to move through their fear of failure, just like you. These successful people had to reframe failure as success.

In fact, every failure represents a little success because it helps you understand how to succeed. When you see it as just one part of the process, one step toward success, you stop fearing it. Instead, you welcome failure because it teaches you how to get where you want to go.

Every failure represents a little success because it helps you understand how to succeed.

When you start believing you might not fail, you become an optimist, and optimists succeed more often than pessimists. Why? They don’t get stuck in the experience of failure. They see that failure as just another challenge to overcome—and an educational one at that—on the way to success. They look for solutions and answers that will help them do better next time.

Optimists are not realists. They don’t focus on what might seem very real to you—the chance you could fail. Instead, they focus on what in their minds is real—the chance they may not fail. That helps them continue their forward movement, enthusiasm, and belief that they can succeed.

Train yourself to see and believe in the possibility that you will not fail. Out of that mindset will come the shift to I have the ability to succeed. That’s when your success become inevitable.

How does this shift in mindset affect your ability to move forward with your goals and dreams?

Find out more and register by clicking here.