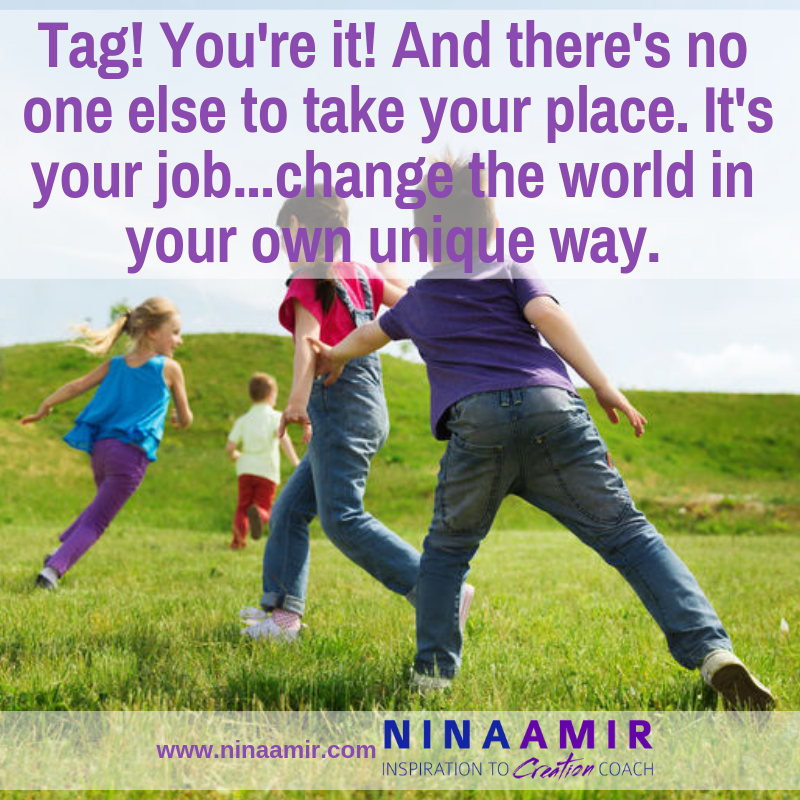 Do you remember playing Tag when you were young? It’s a simple game in which one person touches another and exclaims, “Tag! You’re it!” The other players then run around that person and try not to get tagged next.

You may not realize it, but you’ve been tagged. In the game of life, you’re “it.”

In fact, you were tagged long ago, but you likely weren’t conscious of the touch. Now, it’s your job to go out into the world and tag other people…who will tag more people.

There’s one difference in the rules of this particular game of Tag, though. As you touch someone else, you don’t give up your role as “it.” You remain “it” for life as do all the other players who become “it.”

And everyone has been tagged for the same role—to change the world for the better.

You may not realize it, but you’ve been tagged. You’re “it.”

At the 2019 Golden Globe awards, Jeff Bridges received the Cecil B. DeMille Award. During his acceptance speech, he told the story of being given an acting role that he struggled to embody. He went to the director and told him the part wasn’t working for him and that he wanted to back out of the contract. The director looked at him and said, “Tag! You’re it!” In other words, “You are this role so, step into it. No one else is playing the part instead of you. It’s yours.”

Bridges’ point was simple: The role of changing the world is not one you or me—or anyone else—can abdicate on. We can’t get someone else to do it for us. It’s yours—and mine. As part of the human race, it is our job to create transformation.

We’ve each been tagged.

Everyone has been tagged for the same role—to change the world for the better.

There’s No One Else

Most of us would agree that the world is not perfect…by a long shot. People don’t behave the way we’d like them to. (Sometimes even we do not act the way we’d like.) Our situations, leaders, governments, economic systems, and environment (just to name a few things) aren’t the way we want them to be, either. There are lots of things that would benefit from a change for the better.

Your choices at the grocery store tell grocery store chains what to stock, for instance. And that decision ripples down to impact food manufacturers and produce growers. What you watch on television helps broadcast media stations decide what shows to run next season as well.

How you treat your co-worker may impact how she interacts with her children or spouse later that day. The smile you give to someone on the street could brighten his day enough to make him want to do the same with the next person he meets. The dollar bill you offer to the lady with the cardboard sign saying she’s homeless and without a job could add enough to what she’s already collected to allow her to get a motel room, where she can shower, get a good night’s sleep, and go on a job interview the next day—and land a job.

Everything you do impacts someone or something else. And that’s true for each and every one of us.

Everything you do impacts someone or something else.

In his speech, Bridges also mentioned the term “trim tab,” which is a small device that allows the direction a boat or airplane, for instance, travel to be adjusted without constant pressure or concentration from the person doing the steering. It’s like a small rudder attached to a larger rudder on a ship, which helps keeps the ship moving in the desired direction or turn more easily.

Designer Buckminster Fuller is often cited for his use of trim tabs as a metaphor for leadership and personal empowerment, and Bridges mentioned him in this context as well. In the February 1972 issue of Playboy, Fuller was quoted on this topic. He said: “Something hit me very hard once, thinking about what one little man could do. Think of the Queen Mary—the whole ship goes by and then comes the rudder. And there’s a tiny thing at the edge of the rudder called a trim tab.

“It’s a miniature rudder. Just moving the little trim tab builds a low pressure that pulls the rudder around. Takes almost no effort at all. So I said that the little individual can be a trim tab. Society thinks it’s going right by you, that it’s left you altogether. But if you’re doing dynamic things mentally, the fact is that you can just put your foot out like that and the whole big ship of state is going to go. So I said, call me Trim Tab.” The situations you see around you seem like big ships, and you have no way to steer them in a new direction. In fact, you do. You are the little rudder—the trim tab—that helps turn the ship. Even what you do with your mind—what you think and believe—makes a difference.

You can steer huge ships toward a better future and world for all of us.

We’re always navigating the ship, even if it feels like the only thing we change is our personal ship. Your ship’s path through the water sends ripples…even waves…out that touch other ships and, potentially, change their course. That’s why it’s so crucial that you begin to navigate your boat more consciously and intentionally. It affects all the other ships around yours as well as those across the ocean.

And remember: You’ve been tagged. Don’t say it’s somebody else’s job to create change. It’s your job. You are “it.”

You may be a small rudder, but you can steer huge ships toward a better future and world for all of us.

How do you feel about being tagged? How are you making a difference as a Trim Tab? Tell me in a comment below.

Are you feeling powerless? It’s time to get clear about how you can affect change and boldly take action to make a difference. Step into YOUR best self and best life. Fulfill your potential and purpose. Give me an hour of your time, and I’ll help you make a differnce in your life and the world. Apply for a one-hour FREE Certified High Performance Coaching strategy session. Fill out this application.